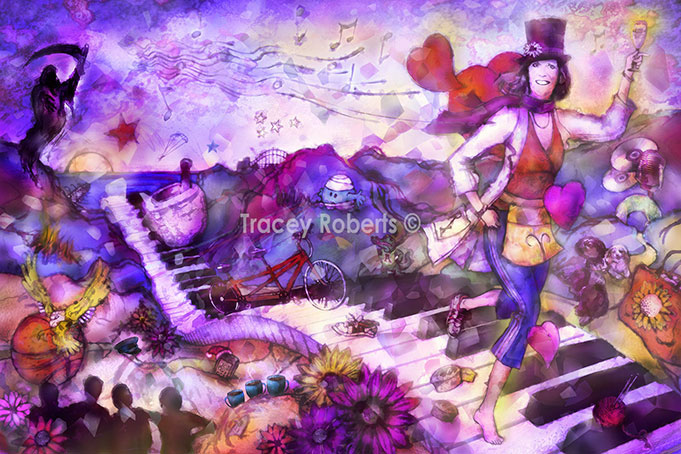 (press play to hear the music created for this amazing story)

Lyn Phelan is one of the most inspiring and beautiful people I have ever known - I've actually known her for over 30 years but have really only gotten to know her properly in the last 3 years. One day out of the blue, I received an email from her asking me if I remembered her. I certainly did - lots of fun, singing and piano-playing memories from Melbourne Uni and Pharmacy College days - and in a nutshell, she informed me that she had GBM - GlioBlastoma Multiforme, the most aggressive form of malignant brain cancer in humans, didn't have much time left and was reconnecting with some of the people she had known in her life.

Anyway, to cut a long story short, we caught up on 25 years and produced an album together of all the songs she had written about how it felt to be told you only have a year to live. I then wrote a song for her for her 50th birthday, called "By a mile" and what followed was her "Story in Art" which we have entitled "Outrunning the Reaper", also a line in the song.

Lyn's "Story in Art" is a figurative and symbolic representation of her life using the piano keyboard as the platform for her journey as she continues to outrun the reaper (she is still going strong, years later!!!).

She wanted a purple coloured piece to match the decor in her bedroom and to have representations of her family (the hearts are her husband and children, the stars are those who have passed) and her friends (the silhouettes, the coffee mugs) and the things she loves (favourite flowers, certain foods and drinks, sports gear and logos, her dogs, a ball of wool, the CDs she made and so on).

There are elements representing significant experiences (her house fire, climbing the Sydney Harbour Bridge, the Great Barrier Reef in the sky) and some objects which represent funny experiences which happened, and of course the whole dip where she was diagnosed with a brain tumour and needed surgery.

She is wearing her Pharmacy jacket and her Aries Apron (she loves to cook) and her voice sounds like Stevie Nicks from Fleetwood Mac (hence the top hat)...she is sometimes forgetful (losing a shoe) and is wearing meaningful jewellery and her favourite Basketball team's coloured scarf...

The grim reaper has an arm outstretched and holds the sickle high in his ever threatening pose but he’s very much in the background and although he’s been chasing Lyn for a few years, he is almost in a state of paralysis these days ‐ and the musical stave lines through the sky represent the wind and the powerful spiritual nature of her music, it’s the vibrato in her voice and it also represents the invisible force-field of music, keeping the reaper at bay ‐ he can’t cut through it.

There are other elements that I created (as part of my original design and artistic style) and others I discovered as I was doing it - on some kind of spiritual and intuitive level, I knew they would be that way - that seems to happen with a lot of my work and it’s one of the reasons I love doing these personalised pieces so much.

This one was certainly very special and quite an honour really. I am very proud of this piece - and proud of Lyn too. She is really amazing.