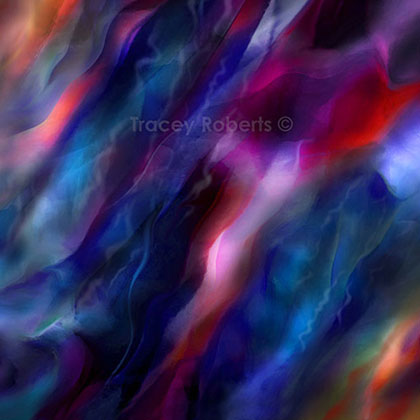 Ade Ishs's is a Melbourne-based pianist and composer with an intensely beautiful and rich, jazz style and I have enjoyed his piano performances immensely. It is some of the most exquisite and colourful music I have ever heard so I was thrilled when he asked me to produce a piece of artwork for him based on the way I see colours and shapes when I hear music. (Music-colour synesthesia). He has created a wonderful 4-part musical composition over 40 minutes in length, entitled, "Four Seasons Suite" and he wanted me to produce the artwork for his latest album release based on the 4 different movements which represent the transition from one season to the next. ("Four Seasons Suite" may potentially be released on vinyl therefore we needed to create it at a larger than CD size).

The way I constructed the piece was to listen to each of the movements and reproduce the shapes and colours I could "see" in my head as I listened to the music. It took a few listenings of course. I started with the concept of shapes moving upwards, as, when I hear Ade's music, I immediately feel like I soar, it's so uplifting ... so the direction of the movement in the music is veering to the top right. The work evolved in order from top left to bottom right with the seasons blending into each other, as they do in reality.

Summer-Autumn has lots of lighter happier golden sounds and shapes, Autumn-Winter has more depth, a bit of groundswell and lots of higher trillier piano notes ... (the white-ish swirly elements). Winter-Spring is very strong and has lots of passion (red) and tumbling notes (like a waterfall emanating from a cavern - the lighter section in the middle) and it's almost like the two seasons are battling each other at times (represented by the two darker areas at the top of this section) but the light is pushing through into the positivity of Spring and new growth. Then finally Spring-Summer lightens up a bit more with quite a lot of piano notes again, then gets hotter and ends quite passionately and strongly with yellows and then that dark hot red in the bottom RH corner.

This piece is also available as a limited edition print which can be purchased here.

For more information about Ade Ishs, to hear the music that inspired this artwork, or to purchase the album "Four Seasons Suite" click here (www.adeishs.com/four-seasons-suite)